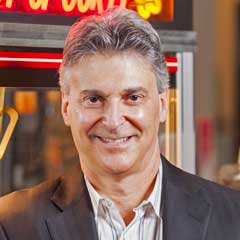 Dr. Matthew H. Bernstein is the Chair and Goodrich C. White Professor of Film and Media Studies at Emory University, where he has taught courses on film history and criticism since 1989.  He is the author of the books Walter Wanger, Hollywood Independent (1994, 2000) and Screening A Lynching: The Leo Frank Case On Film And TV (2009, named a Choice Magazine Outstanding Academic Title).  He is the co-editor of Visions of the East: Orientalism in Film (1997) and John Ford Made Westerns, 2000); and editor of Controlling Hollywood, 1999) and Michael Moore: Filmmaker, Newsmaker, Cultural Icon (2010).  In addition, he has authored many essays on film history and criticism and film reception, ranging from an adaptation study of High and Low to the Atlanta reception of John Stahl’s Imitation of Life.

He is the recipient of two National Endowment for the Humanities research grants; the Katherine Singer Kovacs Essay Award for “outstanding scholarship in film and media studies” from the prestigious Society for Cinema and Media Studies; the SCMS Award for “Outstanding Pedagogical Achievement in Cinema and Media Studies,” and the Franklin M. Garrett Prize for Best Essay on Atlanta and Georgia History from the Atlanta History Center.  He is currently completing a history of Atlanta film culture in the segregated era and has begun work on a comprehensive history of Columbia Pictures.

Bernstein served as Book Review Editor for Film Quarterly for seven years, as well as Coordinating Editor for The Velvet Light Trap; he has also served on the editorial boards of the most prestigious American academic film and media studies publication Cinema Journal as well as The Journal of Film and Video. He also currently serves on the National Film Preservation Board, which advises the Librarian of Congress about issues in film preservation and the 25 films to be named annually to the National Film Registry.

In Atlanta, Georgia, he is a past co-chair of the Atlanta Jewish Film Festival, where he has also served on the selection, programming and steering committees; currently he is a member of their board of trustees.  Since 1998, he has served as host and moderator of The Atlanta Cinema Club, which previews and discusses foreign and independent films.  He is the recipient of the first annual Atlanta Jewish Film Festival Award (2006), the IMAGE Award “for exceptional contributions to independent film and media arts” (2008) and Emory University’s Faculty Creativity & Arts Award (2013).